Popular Nigerian show promoter, Smade, has spoken up after Wizkid showed interest in touring with Davido.

Taking to his official Instagram page, the show promoter recounted how he got Wizkid to join Davido on stage at the singer’s UK tour in 2018.

According to Smade, it all happened at Davido’s UK tour in 2018 at the Brixton Academy. 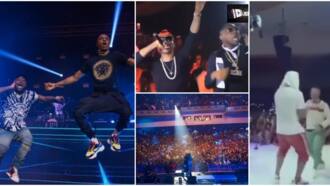 The promoter noted that he will one day tell the story of how he and someone else got Wizkid on the show after all but one of the 30BG crew members said no, they did not want.

Smade then thanked God that he summoned the courage to whisper into Davido’s ear that Wizkid was around and it turned out to be one of the most magical nights in Afrobeats till date.

“This was the show that took Afrobeats to the NEXT LEVEL #DAVIDOUKTOUR 2018 at Brixton Academy Brixton.

“One day I will tell the story of how I & @iamdonbazy got WIZKID into this show and how all 30BG crew said NO (we don’t want) except 1. Thank God i summoned courage to whisper in David’s ear “WIZ is here”. That night was magical and one of the biggest nights for Afrobeats till date. The show also had amazing stars like Mr EAZI, Nots, Nedu Americano, The Compozers Band & more. 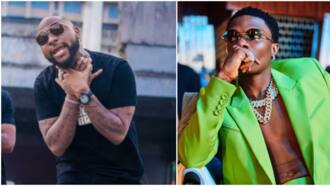 “I Have Never Been the Problem”: Old Video of Davido Talking About an Album, Tour With Wizkid Trends

“For now let’s enjoy this good news from These Goats of Afrobeats. SPREAD LOVE.”

Read what some netizens had to say about Smade’s post below:

“lt’s not too difficult to enjoy Burna boy, Davido and wizzy’s songs together. What’s with the fans war? I smile, when ever I see davido and wizzy together.”

“Something that happened since 2018, and we will still have to wait for one day before you can tell.? Bia nna ,shift for one side. Meanwhile, I hope we can hear from mr. One day story teller, wizkid is not the bad man here. He wants association with Davido but the yeye crew be fighting unnecessarily. I hope davido sticks to being on his one. He is a nice person and deserve loyal and well deserving people around him. I love wizkid, I love Davido and I love Burna. I love good music and I do not care who sang it.” “Mr Jollof you hear?” Wizkid tells people to make sure their families ‘don chop’ in 2023 as he babysits sons

“Na wa o everybody has story to tell no secret again”

“Funny how people think Wiz doesn’t make attempt at all, if he’s being shunned he would definitely give space. Everyone can coexist peacefully without comparison. Spread love.”

“This is truthfully unhealthy. People are trying to bury hatchets, we are helping them to use shovel to dig out issues. Can we stop this? When are we going to learn. I not a fan of things like this but we are all humans. Let’s be happy when there’s a move of reconciliation.”

“Which story you wan tell again some day?? You don talk the story finish na”

“What’s the bottom line of this post now??? Cuz we don’t understand.”

“Let’s just be sincere eeeeeh 30bg people sees davido have been releasing music davido crew ,.. all of them have been the one both he pa have been the one mocking wizzy albums songs and all ,.. but have never see wizkid crew being down davido projects once I mean once … davido crew have showed this hatred many times well sha it’s well i pray this tour go well for sure everyone just want to bad mouth wiz ,.. Tanish his image he might not have help people like you said ,.. but he have crew pa managers he is paying people who cook for him boys who moves around with him and have never heard of any complain that wiz is this ir that make una rest.” 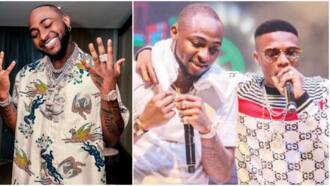 “One day I will tell a story…and you just did.”

It looks like Nigerian singer Davido has confirmed going on a tour with his colleague Wizkid.

Recall that Wizkid had earlier taken to his social media timeline to announce he would be going on a joint tour with Davido after his More Love, Less Ego MLLE tour.

Legit.ng spotted Davido’s reaction to the announcement on popular blogger Tunde Ednuts’ page on Instagram as he liked it.

“Mr Jollof You Hear?” Wizkid Tells People to Make Sure Their Families ‘Don Chop’ in 2023 As He Babysits Sons